It’s hard to write about radio without feeling nostalgic: as if radio were a thing of the past that met its unfortunate doom, the ominous Internet.

Of course, this is ludicrous because radio is alive and thriving today more than ever.

And RumbleTalk was there to help.

Radio adapted to the Internet

In 1979 the Buggles were singing about the tragedy “Video killed the radio star” but more than three decades later we still listen to radio.

This premonition was as accurate as the “futuristic” glitter hair worn in their video. Thank goodness that didn’t become a thing.

Also, the irony can’t be missed that radio was probably a better marketer of their song than that video, even as humorous as it is to watch.

Today, you don’t even need an AM/FM channel to host a radio show. With the right software, the Internet is a full-fledged broadcasting platform.

That’s where RumbleTalk comes in.

Internet radio shows are now using group chat to engage with listeners in ways not possible prior to the wide use of the Internet.

I remember the days of calling in to comment on the topic of the hour, hoping to be the 10th caller to win tickets to the next concert, or simply calling to request a song.

Now these interactions can all be done with RumbleTalk group chat, and further, radio listeners can chat among each other. The conversation is open and accessible, no longer delayed by the speed of the call screener.

RadioNOPE is an Internet rock ‘n roll radio station that has been a long time RumbleTalk customer.

Their group chat is embedded throughout their website to engage listeners on their homepage or while they are visiting the page of a specific show. Listeners can talk about the songs playing or interact directly with show hosts such as with Live from the Barrage, a favorite talk show hailing from Queens. 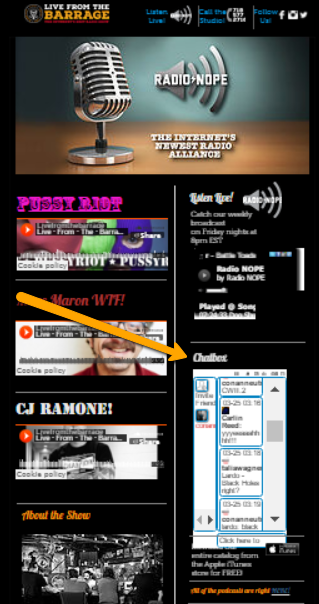 But don’t take my word for it…

Here’s what Conan, founder and self described “benevolent dictator” of RadioNOPE, had to say about RumbleTalk’s influence on the Internet radio station.

RumbleTalk is an integral part of the RadioNOPE experience. As a 24/7/365 streaming radio station that is heavily curated, the dialogue between station and listener is vital. Whether it is as simple as a listener asking information about the song that is playing, or just the shared experience of listening to things together, the chat takes RadioNOPE a cut above algorithm driven experiences like Pandora and its ilk, and the interaction has an extra level of engagement and surprise behind throwing on a Spotify playlist or putting a library on “shuffle”. This is true of the music shows, as well as the talk shows on the station, none more so than with the station’s flagship show “Live from the Barrage”, where listeners react with the hosts, guests, and each other with a special lexicon of in-jokes and phrases derived from the show itself.
RumbleTalk is how we elevate a simple website into one of the most carefully curated and awesome listening experiences on the Internet.

The advantages of using RumbleTalk for radio are many.

Group chat is a necessary tool for a radio show to optimize listener engagement. With RumbleTalk, radio stations have a flexible platform that is easy to use for both you and your listeners.

You can have separate group chats for each show or one seamless experience throughout, use group chat for instantaneous dialog between show hosts and listeners as well as listener-listener.

Using group chat also captures just how many active listeners the show is reaching as opposed to just passive listeners. These numbers have many useful applications and can be helpful for higher advertising revenue.

And there’s one more thing, RumbleTalk loves radio. This means that as we continue to develop our product we’ll have you in mind and create features tailored especially for radio. That’s a service that just can’t be beat.

Visit our homepage or contact support@rumbletalk.com for more information on how RumbleTalk can improve your listener engagement.